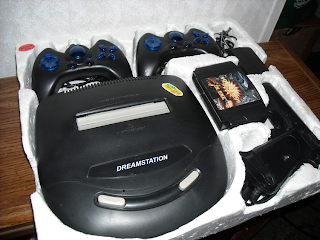 Up to this point I was only familiar with the numerous handheld clones and the clunky 57000 Video Games, so when the Dreamstation actually worked as well as any of the officially branded systems I own, I was kind of shocked! The Dreamstation isn't flashy or splashy but it did exactly what I wanted it to do, it worked. The video quality was good, the sound quality was what you would expect from an NOAC, yet a year later I found out that the Dreamstation had a trick up its sleeve.

One night I was playing my (official) Famicom copy of Bases Loaded when I noticed the volume was much lower than any of the other games I had been playing, so I simply turned the volume up. Shortly after the game started I heard voice clips and additional sound effects I had never heard from the game before. The  Dreamstation was somehow emulating the FM synthesis chip from the Famicom.

None of my other Famiclones will play these voice or audio clips hidden deep within the game's coding. And the NES was never given the FM chip, so when I play that cartridge in my NES all volume levels are normal, but the game play is devoid of any real noise, I can tell there are missing sound effects. I'm not exactly sure how the Dreamstation is able to emulate or replicate the FM chip, but I know for a fact it does.

Besides being able to emulate FM sounds and overall functioning better than any of my other Famiclones, the Dreamstation isn't without it's faults, simply the short controller lengths. I covered this in my controller extension cable article. But to their credit the A and B buttons are laid out like an actual NES, with A and B shoulder buttons as a cool bonus, meaning I can use these controllers without getting confused by backwards controls. 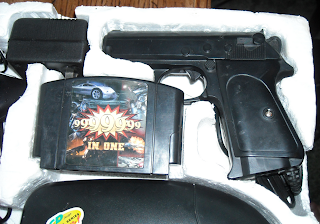 In addition to the controllers the Dreamstation also included a gun, which looks insanely too real to be used outside of the home. The trigger on mine was snapped off by the previous owner, but even so the light gun is quite accurate and comfortable to hold. Not surprisingly the included pirate multicart has quite a few variants of games to test the gun out, which is handy.

Not only did the seller toss in the above mentioned cartridge, which looks a lot like a Nintendo 64 cartridge, they also included the yellow cartridge, as I stated at the beginning of the article. Both cartridges are filled with the standard pirated games as well as some random hacks tossed in. Finally I have a pirate cart with Dream Mary built in! (Super Mario Bros. with the wrong scrolling) I've seen many other Famiclones in this shell with various other names, but I'm not sure if they are the exact same board inside or not. Which makes me wonder if they would all be able to emulate the FM chip. So far the Dreamstation is my favorite Famiclone console that I own, but if there is a better Famiclone on the market I'm sure I'll track it down!
at 6:59 PM